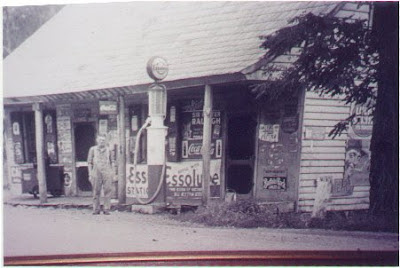 “Out in the country, about 12 miles from this city, there is a store which for 126 years has held its trade, despite the disadvantage of its location, by a type of advertising it has followed since long before advertising developed into a science. Its color and the capitalization of that color in its name have made the "Old Yellow Store" a historic landmark throughout Eastern Tennessee. For 126 years, every time this store has been repainted, it has been repainted yellow.

Captain De Wolfe Miller, an old merchant of the place, tells how his grandfather built a raft of logs and floated them down the river with his family to the present site of the Yellow Store. Impressed with the country, he decided to locate, ad entered twenty acres of government land. Soon he made larger entries until he owned a large body of land and the Yellow Store was built.

But in those days, he says, "there were but few things kept in a store. The people tanned the leather, and made their own shoes, and then got the raw cotton, spinning and weaving their own clothes. I was a grown man before I ever wore a suit of "store clothes". In those days the people led the simple life and their wants were nothing compared with what people these days feel they just must have. My grandfather ran a tanyard and a shoemaker was a part of the store force.