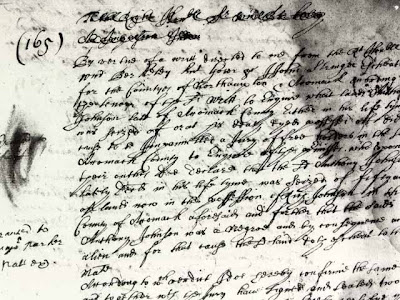 By virtue of a writt granted to me from [names listed here, which are illegible] John Stringer Escheator for the countys of Northhampton and Accomack to enquire what lands Anthonio Johnson late of Accomack County either in his life tyme. . . a jury of free. . . in the said Accomack County to enquire. . . doth declare that the said Anthony Johnson lately deceased in his life tyme was seized of fifty acres of land now in the possession of Rich. Johnson in the County of Accomack aforesaid and further that the said Anthony Johnson was a negro and by consequence an alien and for that cause the said land doth escheat to this . . . .

From the collections of the Library of Congress

In August of 1670, several months after Anthony Johnson's death, a jury in a Virginia court decided that, because "he was a Negro and by consequence an alien," ownership of the 250 acres Johnson once owned should be escheated, or reverted, to England.

Anthony and Mary Johnson had sold 200 acres of this land to two white settlers; the other 50 they gave to their son, Richard, who soon thereafter sold the land to another white settler.

Posted by Historical Melungeons at 9:29 PM