Where did the Cherokee Get Their Turbans? 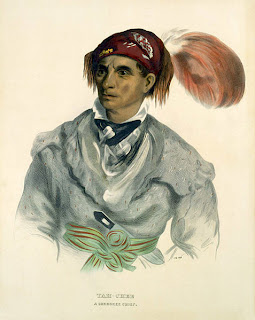 Proponents of a Turkish origin for Native American Indians have used the Cherokee turban as proof of contact and genetic contributions from Middle Easterners to the Cherokee and other tribes. Quite the contrary, the practice was introduced on their famous delegate trip to the Court of King George:

"Turbans were first introduced to the Cherokees by King George's
ministers, who deemed the appearance of Mankiller, Stalking Turkey,
Little Carpenter, and other chiefs who made the trip to England
much too severe to be looked upon by their King. The King's
ministers changed the Cherokee visitors into garments which had
been left behind by a delegation from India. The Cherokee chiefs returned to the Cherokee Nation
with the garments, which included the turbans.
These turbans and jackets became highly-treasured
items, worn for special occasions.

At first, Cherokees made additional turbans from
expensive imported cloths, but with the introduction
of the spinning wheel by George Washington, the
Cherokees began making their own cloth, from which
the Cherokee men fashioned headwear styled like the
exotic (and by now deteriorating) turbans worn at Council
by the aged chiefs who had 'crossed the water.' "

Scroll to the bottom of the page to view a video explaining this and an illustration of how to wear a turban. 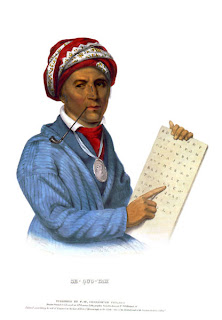 Posted by Historical Melungeons at 1:47 PM