The Secrets of Lincoln's DNA 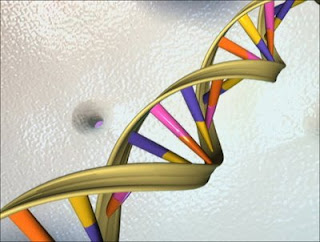 Those who are serious Lincoln scholars probably already knew and the rest of us who watched "The Plot to Steal Lincoln's Body" last night on the History Channel now know that Lincoln's body is buried under 10 feet of concrete. This was done after a serious attempt to steal his body which could have succeeded and following many years of subsequent paranoia and anxiousness on the part of the custodians of his remains. Therefore one would assume that his DNA is safe from a prying public whose inquiring minds want to know. But that is not the case. Not all of Lincoln's earthly remains lie under those tons of concrete.

Quite a bit of Abraham Lincoln's DNA was left behind if it can only be retrieved. There is blood, hair and bone fragments capable of yielding their secrets if approached in the right way. And if today's technology isn't up to the job, tomorrow's probably will be. Of equal importance to learning whether or not Lincoln actually suffered from one or more of the three serious genetic diseases long suspected, is the possible answer to two other enigmas. What was his ethnic origin and who really was his father? Many have refused to believed a lowly uneducated farmer such as Thomas Lincoln could be his biological father. While others have speculated that the Lincoln surname and his grandfather's given name, Abraham, suggest the paternal line was Jewish. Maybe the questions will all be answered in the future, if not soon, then later.

The Secrets of Lincoln's DNA

Come along with me, past all the bicentennial hoopla, to a quiet place north of the White House. Here, at the National Museum of Health and Medicine, you'll find a glass case housing the most incredible Lincoln memorabilia on the planet: the man himself. His blood on the cuff of a surgeon's shirt. Snippets of his chocolate brown hair. A handful of bone fragments removed from his skull.

Yes, Lincoln! Guess what that might mean? Lincoln's DNA! Scientists have been speculating about the president's health for decades. It's believed he had malaria, smallpox and depression. Syphilis has been debated. And there are hypotheses about three rare genetic disorders—Marfan syndrome, spinocerebellar ataxia 5 and multiple endocrine neoplasia 2B (MEN 2B). If scientists had access to Lincoln's DNA, might they be able to clarify the medical history of one of the world's greatest historical figures? Could they also sequence his entire genome, and perhaps trace his genealogical roots back to their origins? Should the 16th president's mortal remains be put to the test?

I'm not the first person to ask this question nor am I the first to think it's a very intriguing idea. As far back as 1991, a panel of experts gave scientists a "qualified green light" to test Lincoln's DNA for Marfan syndrome—decades after a physician proposed that the president might have had it. At the time, researchers decided it wasn't technically feasible to move forward, but genetic testing is far more sophisticated today.

Experts say it might be possible to extract chopped-up bits of DNA from these museum remnants, assemble them into the gene they're looking for, then make a diagnosis. There are, of course, considerable challenges: nobody knows whether there's enough DNA in good enough condition to do a gene test, or to do one conclusively. As for sequencing Lincoln's entire genome, "I don't think it's doable," says Dr. Philip Reilly, author of "Abraham Lincoln's DNA," because there are such small pieces left and there would likely be large gaps.

If Lincoln had ataxia 5, a neurological disorder, he'd have something in common with 90 relatives descended from his paternal aunt and uncle. University of Minnesotagenetics professor Laura Ranum says there's a 25 percent chance. If so, the president would be a great example of somebody overcoming physical challenges to achieve greatness, she says. She'd love to see a test. So would Josephine Grima, of the National Marfan Foundation. "It would help raise awareness exponentially," she says. "Like what Roosevelt did for polio."

Posted by Historical Melungeons at 5:55 PM