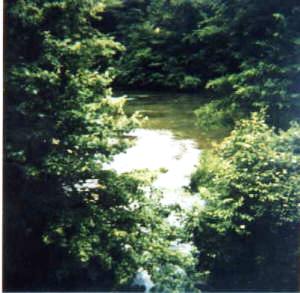 Flat River, Orange County NC
Partial 1755 Orange County North Carolina tax list from the Flat River area. John Collins 1 tithe (mulatto); Micajer Bunch 1 tithe (mulatto); Gedion Bunch 1 tithe (mulatto); Moses Ridley 1 tithe and wife Mary (mullattoes); Thomas Gibson 3 thithes (Mulatto); George Gibson 1 tithe (mulatto. These are the Melungeon families who came to Tennessee. According to North Carolina records the Saponi Indians had a settlement about 15 miles east of Hillsboro, county seat for Orange County, North Carolina, and some of them may have been the ones named in this court case in Orange County, Virginia: "Alexander Machartoon, John Bowling, Manicassa, Capt. Tom, Isaac, Harry, blind tom, Foolish Jack, Charles Griffin, John Collins, Little Jack, Indians being brought before the court for stealing Hogs, Ordered that their Guns be taken away from them till they are ready to depart of this county, they having declared their intentions to depart this colony within a week." (pp 309-312 Orange County, Virginia Order Book 3, 1741-43, Courtesy of Virginia DeMarce.)

Posted by Historical Melungeons at 11:51 PM