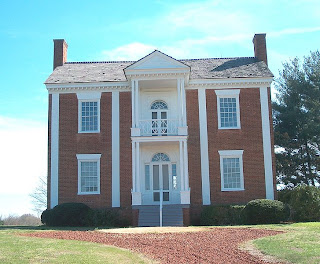 From Wikipedia, the free encyclopedia

The Chief Vann House is the first brick residence in the Cherokee Nation that has been called the "Showplace of the Cherokee Nation". Owned by a Cherokee chief named Chief James Vann, The Vann House is a Georgia Historic Site on the National Register of Historic Places and one of the oldest remaining structures in the northern third of the state of Georgia. It is (on Spring Place) located at the intersection of U.S. Highway 76 and Georgia 225 in Murray County, on the outskirts of Chatsworth in northwest Georgia (leaving the main highway and heading south towards the Vann House, which has a commanding view of all the land around it and of the Cohutta Mountains, some 10 miles (16 km) to the east.).


Construction of The Vann House

When James Vann was rising to become the wealthiest businessman in the Cherokee Nation as well as a chief, he decided to build a two-story brick house which would reflect his status. For its construction, Vann brought in professional architects for its design. In addition to providing an education to local Cherokees, the Moravians contributed to the building.

In July 1803, a man named Vogt, perhaps James Vann’s brother in-law, Charles Vogt, and Dr. Henry Chandlee Forman, arrived to begin construction. Work began in late 1803 and the house was completed early in 1804. Both the exterior walls (which are around eighteen inches thick) and the interior walls (which are around eight inches (203 mm) thick) are solid brick. These bricks came from the red clay located on the Spring Place Plantation (Vann House) property. Handwrought nails and hinges came from Vann's own blacksmith shop. Only the interior walls of the third floor are plaster on wood.

The red, blue, and yellow seen in the Vann House were often used in other homes of the late seventeen hundreds and the early eighteen hundreds. The only difference between how these colors were used in this home versus how they are used in other homes of the time is the way in which they are distributed. Most homes of the Federal period would concentrate colors in one room, giving a house a red room, blue room, etc. However, in the Vann House the colors have been mixed in almost every room giving the rooms a multi-color appearance, as well as the mantels, door jambs, and wainscotings, all of which are original to the house. The doors, known as Christian doors, are of special interest. Their construction features a cross and an open Bible.

After constructing The Vann House, James lived at the house for 5 years before he was killed at Buffington’s Tavern in 1809. After his death, his favorite child, Rich Joe Vann, which was neither his youngest or eldest child, inherited the house.

Enter your email address to start receiving this blog in your inbox
Posted by Historical Melungeons at 5:58 PM