William Holland Thomas never knew his father, was raised by a single mother in a lowly mountain home, lacked any formal education, but was one of the most prominent figures in Western North Carolina’s history. 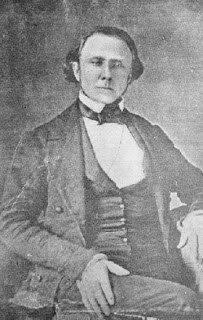 Thomas was the commanding colonel of North Carolina's sole American Civil War legion, Thomas' Legion, and was the only white man to serve as a Cherokee chief. His cousins included President Zachary Taylor and Confederate President Jefferson Davis. It is widely believed that without Thomas's intervention there would not be the Eastern Band of Cherokee Indians, and, to this day, the Eastern Band bestows honor and gratitude to their great white chief.

To read more about this fascinating man and the origins of the Cherokee Eastern Band: Click Here.
Thomas' Legion of Indians and Highlanders, commonly referred to as the 69th North Carolina Regiment, was officially organized by William Holland Thomas on September 27, 1862, at Knoxville, Tennessee. Its members were recruited predominately from the Western North Carolina counties of Haywood, Jackson, and Cherokee; East Tennessee also recruited many for the unit. The command initially totaled 1,125 men and contained an infantry regiment and a cavalry battalion. Its artillery battery, John T. Levi's Light Artillery Battery (a.k.a. Louisiana Tigers), formerly served in the Virginia State Line Artillery and was added to the legion on April 1, 1863. During the war, the unit mustered more than two thousand five hundred officers and men (included 400 Cherokees: the Cherokee Battalion).

Note: Many Confederate units from Louisiana serving the Eastern Theater were known as Louisiana Tigers at various times during the Civil War, not just the one mentioned above.

Enter your email address to start receiving this blog in your inbox
Posted by Historical Melungeons at 11:33 PM