History, genealogy, and the latest DNA technology will come together at the first annual Melungeon Historical Society conference. The public is invited to this event, which will be held on June 12 at the Hawkins County Rescue Squad meeting room, 955 East McKinney Avenue, Rogersville, Tennessee.

"For nearly two hundred years, writers and researchers have speculated about the origins of the Melungeons," says Wayne Winkler, president of MHS. "For the most part, the story of the Melungeons has been told through myths and legends. The Melungeon Historical Society believes that answers will be found through scholarly research."

Presentations at the MHS conference will begin at 10 a.m. and will cover topics such as the origin and historical uses of the term "Melungeon," DNA research on Melungeon families, and other topics related to the multi-ethnic people first documented in the Clinch River region in the early 19th century. The use of DNA technology in genealogy will be covered by Roberta Estes, founder of DNAExplain, a Michigan company that analyzes and interprets individual DNA tests.

Other presenters include Jack Goins, Hawkins County Archivist and author of Melungeons and Other Pioneer Families; Kathy Lyday-Lee, a professor at Elon College who taught a course on Melungeons; and Kathy James, who will present DNA information on the Gibson and Collins families.

"This conference is of special interest to those who want to learn more about the Melungeons," said Winkler, "but it is also designed to benefit anyone interested in genealogy and especially in the use of DNA technology to trace family lines."

The conference is free, but donations are suggested to help promote the work of the Melungeon Historical Society. For more information, contact Winkler at 423.439.6441 or

Posted by Historical Melungeons at 11:09 AM No comments:

Why is Fort Christanna important?

On Saturday, April 25 at 2 p.m. Fort Christanna Historical Site will officially be opened with a gala event at the site. The public is heartily invited to come and see the historic opening of this new Brunswick attraction.

Why is this piece of land hidden on a dirt road in the woods so important? Why will hundreds of people celebrate its existence on the 25th?

In 1714 Virginia was a colony of Great Britain. The area that now is Brunswick County was wilderness, with only a few settlers and with wandering groups of Native Americans displaced from their Tidewater lands. Virginia's governor, Alexander Spotswood, was concerned about the safety of settlers and wanted to provide a safe place for more people to come. He was also concerned about the wandering groups of Indians, known as the Tributary Indians, who were often attacked by their enemies, the Nottoway and Meherrin tribes. He additionally wanted to provide a trading site for the Native Americans of the area. He found the ideal spot on a cliff above a bend in the Meherrin River. The colony's legislature provided funding, and in 1714 the fort was built. At that time it was the farthest western outpost of the British Empire. The fort was five-sided with each side some 300 feet long and made of a palisade of split logs. At each corner small bastion houses held a 1400-pound cannon apiece. Twelve rangers under the command of Captain Robert Hicks were housed in the fort. They were young men who rode around the neighboring settlements to offer some protection to the new settlers. Spotswood built a house for himself about a mile from the fort.

The fort was large, covering over three acres, and probably had many buildings inside, such as a storehouse, a dormitory for the rangers, a blacksmith, stables, and perhaps there were gardens, pig pens and chickens. There was certainly an Indian School.

With Spotswood's encouragement, the Tributary Indians moved to Fort Christanna and banded under the name Saponie. They built a village not far from the fort, described as a circle of buildings. Over 200 Native Americans lived in the village. Governor Spotswood paid from his own pocket to hire a teacher, Charles Griffin, to educate the Indian children who numbered as many as 100 at one time. He taught them the Anglican catechism and prayers as well as the three "Rs". . 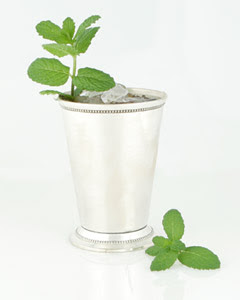 "Thunder Over Louisville" is a sign that it is indeed Spring in Kentucky. Thunder kicks off two weeks of events/ parties that lead up to the Kentucky Derby.
It’s time to read up on the horses or if you bet the jockey (like I do), check to see who has the most wins, and if you like the color of his silks, that’s a plus. I’m sure others use a more calculated reason to bet on a horse, but this seems to work for me.
The thoroughbred industry in Kenntucky really took off during the Civil War, when horse breeders in Maryland, the Carolinas and Virginia moved their horses "west" for safety. They discovered that their horses thrived in the Bluegrass, thanks to the rich lime content of the soil, the gently rolling terrain and the favorable weather conditions.
The Thoroughbred is a breed of horse whose ancestry traces back more than 300 years to three foundation stallions -- the Darley Arabian, the Godolphin Arabian and the Byerly Turk. Named for their respective owners -- Thomas Darley, Lord Godolphin and Captain Robert Byerly -- these stallions were imported into England from the Mediterranean Middle East around the turn of the 17th century and bred to the stronger, but less precocious, native mares. Yes thoroughbred race horses can trace their lines to three stallions, amazing if you figure how many there are now.
So what does this have to do with Melungeons?
Mary T. Brewer in her book, Rugged Trail to Appalachia, writes that Eli Boggs was living in Wise County, Virginia, and, “tradition has it that he was implicated in the murder of Alexander Goins, a man of the Melungeon people of southwest Virginia and Tennessee.” According to which side was doing the telling, Alexander Goins was either a horse thief, and worse, who deserved killing (mountain justice), or he was a respectable trader, dealing in fine horses, which he drove from Kentucky to South Carolina to sell. He supposedly lived in what is now Lawrence County KY and operated a race track and breeding farm in Louisa. He also had $9,000. with him the day he was killed, according to some of his descendants. This tragedy occurred around November 1844 at a place on a ridge of Nine Mile Spur of Black Mountain, known as Goins’ Ridge, about 300 yards northwest from where Mud Lick Creek empties into Callahan Creek. Gabriel Church, born 1814, backing Goins’ side, memorialized the event in a ballad named “Poor Goins.”
I can’t trace Alexander Goins, or Eli Boggs back as far as these thoroughbred race horses can be traced, but when Thunder Over Louisville kicks off Derby week, I think of these men. Goins, with his race track must have known Kentucky raised strong horses but I doubt if he knew it was because of lime soil. Boggs was never convicted or even indicted with the murder of Goins, but it had to have a big influence on his life, whether he did it or not.
So this year when you attend or watch the Kentucky Derby on television, and while trying to gag down a Mint Julep, tip your hat to Goins and Boggs!
Penny Ferguson, in Kentucky

The register book for the parish, Prince Frederick, Winyaw 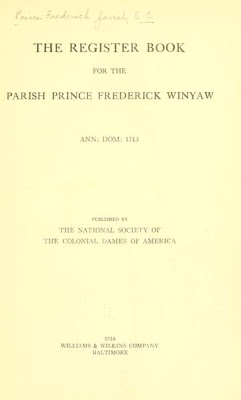 The following Gibsons were found in this book:

Gibson Mary Daughter of Gidion Gibson and Martha his Wife

Book contributor: The Library of Congress

Posted by Historical Melungeons at 8:53 PM No comments: