The Melungeon DNA paper, “Melungeons: A Multi-Ethnic People,” was honored on October 20th by the North Carolina Society of Historians at an awards ceremony in Mooresville, NC.
The North Carolina Society of Historians is a nonprofit organization founded in 1941 whose goal is to preserve and share the history of North Carolina.  One of the ways they do this is by encouraging the preservation of history and research into historical topics by conferring awards annually on worthy projects and their authors.  Awards are granted to organizations and individuals in 14 different categories and the awards are presented at the annual meeting, which is a luncheon, in October.
This year’s banquet was held on Saturday, October 20th in Mooresville, NC.

The Melungeon DNA paper titled “Melungeons: A Multi-Ethnic Population” was granted the prestigious Paul Green Multimedia Award.  Jack Goins, the founder of the Melungeon DNA projects and one of the authors of the paper accepted the award in Mooresville on behalf of all four authors.

In addition to Jack, the authors are Janet Crain, Roberta Estes and Penny Ferguson.  Each author received an individual award recognizing their contribution. 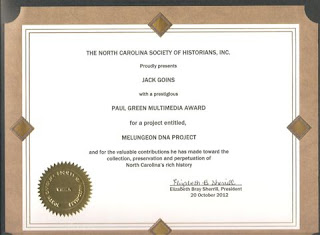 Jack said that Elizabeth Sherrill, the Society President, had many complimentary things to say about the paper, and that she showed an impressive pile of papers and projects that represented the other entries that were rejected.  Apparently, the competition was stiff.  I know they have hundreds of entries every year.
Each project or paper that receives an award also receives the judges collective comments.  Here’s what they had to say about “Melungeons: A Multi-Ethnic Population”:
“This paper is definitely not for the “faint of heart,’ nor can it be considered ‘light reading.’  It is an in-depth study of the Melungeons in the Carolinas and surrounding states that is geared toward those persons with a serious interest in tracing these people by taking a DNA approach. It is an academic paper that is the result of a monumental study that took in many different avenues of research. We found this work to be absolutely brilliant and data pertaining to North Carolina was exciting.  We understand that this study is still a work-in-progress, and we look forward, with great anticipation, to future papers chronicling additional information discovered/uncovered regarding this fascinating race of people.”
The authors would like to collectively thank the North Carolina Society of Historians, not only for the award, but for their dedication to the preservation of history and fostering an environment that rewards people for doing so.

Note by Janet Crain: I want to thank Jack Goins for accepting my award for me and for carefully packing the certificate and sending it to me.

I now have it framed and while I am deciding where to hang it, it it sitting on a shelf in my office.

Thank you to the North Carolina Society of Historians  is also in order. 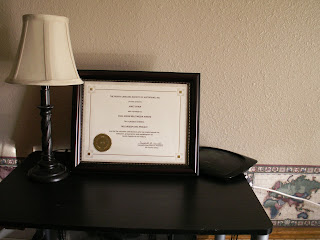 Posted by Historical Melungeons at 10:37 AM No comments: