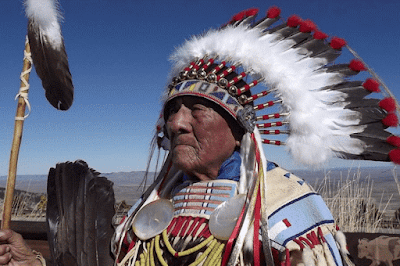 Joseph Medicine Crow, the last war chief of Montana’s Crow tribe, died last year at the age of 102. A noted Native American historian, Medicine Crow was an indelible source of education and a heroic figure of the American west. Herman Viola, the curator emeritus at the Smithsonian Institution’s National Museum of the American Indian, once said “When you meet Joe Medicine Crow, you’re shaking hands with the 19th century.”


Medicine Crow was the last surviving person to hear a first person account of the 1876 Battle of Little Bighorn. His grandmother’s brother, White Man Runs Him, was a scout for Lt. Col. George Armstrong Custer.
Cont. here: http://www.wideopencountry.com/joseph-medicine-crow/?utm_source=Boomtrain&bt_alias=eyJ1c2VySWQiOiAiMjU2YjU4ZGUtOGFiYy00MDA5LWIxNmQtNzg4ODhhYWQ3NGMzIn0%3D&utm_campaign=20170403&utm_medium=manual

Posted by Historical Melungeons at 2:48 PM No comments: