Posted by Historical Melungeons at 8:49 AM No comments:

The products that will be offered at the special prices are:

This offer is good until December 31st, 2008 for kits ordered and paid for by that time.

Posted by Historical Melungeons at 8:24 PM No comments:

Loreta Janeta Velazquez, b. 1842 and C. J. Worthington, Edited by

The Woman in : A Narrative of the Exploits, Adventures, and Travels of Madame Loreta Janeta Velazquez, Otherwise Known as Lieutenant Harry T. Buford, Confederate States Army. In Which Is Given Full Descriptions of the Numerous Battles in which She Participated as a Confederate Officer; of Her Perilous Performances as a Spy, as a Bearer of Despatches, as a Secret-Service Agent, and as a Blockade-Runner; of Her Adventures Behind the Scenes at Washington, including the Bond Swindle; of her Career as a Bounty and Substitute Broker in New York; of Her Travels in Europe and South America; Her Mining Adventures on the Pacific Slope; Her Residence among the Mormons; Her Love Affairs, Courtships, Marriages, &c., &c.

Posted by Historical Melungeons at 6:36 PM No comments:

Some Descendants of Meredith Collins

Meredith Collins was my ggggrandfather. He served in the REVWAR as a Virginian Soldier,
served in the militia after the war was over, and appeared to have moved often always with
a group of Collins families believed to be related somehow. The Collins intermixed or inter-
married with such families as Mullins, Johnsons, Roark, Holloway, Gipson, Trent, Riffe,
Lambert, Justice, Coots, Blankenship, Roberts, and with these names the mystery of a group
called "The Melungeons". In my 25 + years of research I have heard many times rumors of
of a connection to the famous Melungeon, Vardy Collins of Newman's Ridge Tennessee. Many
folks believe Vardy and "Merdy" were brothers and tho this has not been proven, I personally
believe they were related but think they were more likely to have been first cousins, grandsons
of Old Thomas Collins who settled with his sons on the Flatt River of NC.


c.-Meredith "Meredy" Collins - Veteran of the Revolutionary War
b.1760 Virginia *from Eula Conley. d.1841 Pike Co.KY
Revolutionary war- Montgomery-Fincastle Counties Division under Captain
James McDaniell. (his name is on a plaque by the courthouse, Pikeville, KY)

Meredith Collins was probably son a of John Collins Sr. who was the son of old Thomas of
Orange Co. NC then to Pittslyvania Co. VA came from Louisa Co. VA

Posted by Historical Melungeons at 7:57 AM No comments:

Hawkins County Archivist, Jack Goins retired from AFG Industries in 1999 after 37 years of service. In 2000 he published a book “Melungeons and Other Pioneer Families” and was presented the Research Excellence Award from East Tennessee Historical Society for researching the Melungeons and East Tennessee history. In 2004, Goins was appointed County Genealogist on Records Commission by the Hawkins County Commission. In 2005 he was appointed County Archivist and formed a group of volunteers known as Friends of Hawkins County Archive Project. This group was organized to restore the old county records. In 2006 “Friends” was chartered by the State as a non-profit organization and was awarded “Society Of The Year” by the East Tennessee Historical Society.

The following court cases and indexes are in the Tennessee Archive. Circuit Court records are also available on microfilm.

Posted by Historical Melungeons at 6:23 PM No comments:

Our Right to Vote 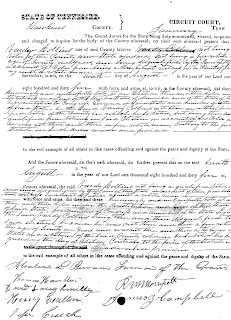 Is everyone excited about the election this year? It has been an exciting one; people seem to be passionate about their choice. One thing we need to remember is how wonderful it is that we do get to vote. If we go back in time, our grandmothers didn't get to vote, and some of our grandfathers, even though they could fight in the wars, didn't get to vote. Court cases show that people known as Melungeons were taken to court for voting. So no matter what your choice is this year--go vote!

Jack Goins spoke on this subject, here are some snippets:

State vs Lewis Minor- Sept 28, 1847. This request was asking for a continuance because his council , John Netherland, could not be present, all seven cases were delayed until January 1848. Also, John Netherland's daughter Eliza Haskell wrote that her father won their freedom.

These cases all resulted from a national election held in all the districts of Hawkins County to elect Representatives, Senators, Congressmen and Governor of the state. I have found 10 who were charged for illegal voting at this time . two were found guilty and one paid a fine and cost. The case was finally heard by a Jury on Saturday Jan 29, 1848 The charge by the state was “ being free persons of color” who were not allowed to vote, or to set on a jury against a white man. More about this later.

In 1834 Tennessee added another law to the territorial act of 1794, which they had adopted, chapter one section 32 declared that all Negroes, Indians, mulattoes and all persons of mixed blood, descending from Negro or Indian ancestors to the third generation inclusive, though one ancestor from each generation may have been a white person, whether bond or free should be held and deemed to be incapable in law to be a witness in any case whatever, except against each other, these illegal voting trials and other cases show that this law was applied to them.

Violating this law was the charge against the Melungeons..
Vardy Collins was indicted by the Grand Jury.
I have found most of the grand Jury verdicts and they all read the same regarding the charge.- I will read part of the Vardy Collins indictment by the Grand Jury which leaves no doubt on what the charges were.
7 August 1846- “On the 7th day of August in the year of our lord 1845 did then and there knowingly and unlawfully did vote in an election held under the constitution and laws of the United States of America and the State of Tennessee for representatives, Governor and members of the state legislature, being disqualified to vote by the laws of this state on account of color, and from being a competent witness in our courts of law in any case whatever except against each other.

This is only a small part of the reading of this indictment as it keeps repeating he was a free person of color and by voting he violated the laws of the United States and this State of Tennessee.

The others in this group were tried by two separate juries on Saturday 29 January 1848, after Wiatt Collins was found not guilty the state dropped the charges on Solomon, Levi, Ezekial and Andrew Collins and most likely because they were all closely related. The Judge ordered that all the cost was to be paid by the county and state.

But they proceeded to try Zachariah Minor and by another Jury. After Zachariah was found not guilty by this jury the state dropped the charges on his brother Lewis Minor and the Judge also ordered that the County and State pay all the cost of this trial.

My biggest disappointment was not finding John Netherlands' argument, but I don’t believe it was the showing of feet as mentioned by Burnett, many old articles imply the argument was Portuguese.

A PECULIAR PEOPLE 1897
Before the war the Malungeon's had a hard time in obtaining the right to vote and to send their children to the primitive public schools of that day. The white citizens declared they were Negros, and the matter finally caused so much bickering and strife between the Malungeons and the whites that it was carried into the courts. In the trials which followed it was developed that the ancestors of these people had emigrated to America about 150 years ago from the interior of Portugal.
To add credence to this story both my Minor and Goins families was enumerated as Portuguee in the 1870 federal census of Hancock County.

To have been found guilty under the act of 1794 the state would have to prove they had an Indian or Negro ancestor to the third generation which would have been from their Great Grandparents. Zachariah Minor was my 5th generation Grandfather.

This next case leaves no doubt that some of the elected officials wanted the Melungeons who they called free persons of color out of the county and the state of Tennessee.

State of Tennessee vs Ambrose Hopkins, the grand jury summoned impaneled and sworn and charged to inquire of the body of the county of Hawkins aforesaid, upon their oath present that a certain Ambrose Hopkins “A Free Man Of Color” and not a NATIVE of said county and state. On or about the first day of Jan. in the year of our lord 1845 removed himself from an adjoining state into this the said county and state aforesaid and the jurors upon their oath further present and say that the said Ambrose Hopkins a free man of color, having been duly notified more than 20 days before this Sept term of the circuit Court 1852 to LEAVE THIS THE SAID COUNTY OF HAWKINS AND STATE OF TENNESSEE.

Note the 20 days mentioned above was pertaining to the following law. In 1831 Tennessee added another law–Chapter 102 Public Acts of 1831. This act declared it unlawful “for any free person of color, whether he be born free, or emancipated agreeably to the laws in force, either now or at any time in any state within the United State to remove himself to this state and remain there more than 20 days. (Meigs Reports Vol 1 P332)
Ambrose Hopkins did not leave the state but he may have moved over in Hancock County.
more here
Posted by Historical Melungeons at 8:53 PM No comments: