Posted by Historical Melungeons at 9:34 AM No comments: Links to this post

This letter was found in South Carolina at the South Caroliniana Library.  It was written in by Sheriff M.R. Buttry, Hancock County TN. 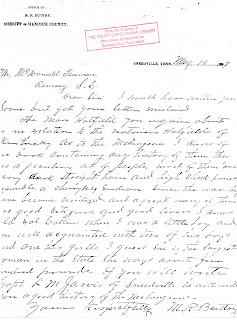 Posted by Historical Melungeons at 5:32 PM No comments: Links to this post

Find What You're Looking for in Knox County, TN 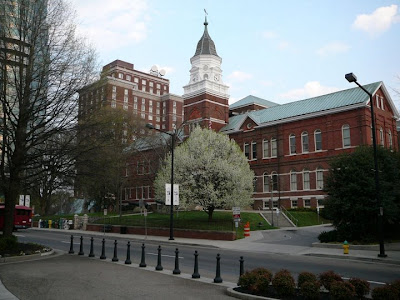 
The purpose of the Knox County Archives is to receive, process, and preserve the non-current, permanent records created by the Knox County, Tennessee government from 1792 to the present. The Knox County Archives provides information on the origins and history of the court systems, court records, genealogy, and history of Knox County, Tennessee. The Archives provides public access to all holdings, with the exception of juvenile records and those restricted by Tennessee laws. It provides local government source material to court officials, genealogists, legal professionals, historians, and the general public.

Knox County was created on June 11, 1792 by Governor William Blount from parts of Greene and Hawkins counties, and has the distinction of being one of only eight counties created during territorial administration. It is one of nine United States counties named for Revolutionary War general and first United States Secretary of War Henry Knox. Parts of Knox County later became Blount (1795), Anderson (1801), Roane (1801), and Union (1850) counties.

In 1786 James White built a fort five miles below the junction of the French Broad and Holston Rivers on the southernmost edge of frontier settlement in present-day East Tennessee. William Blount, governor of the Territory of the United States South of the River Ohio, selected the site of James White's Fort as the territorial capital in 1791. He gave it the name Knoxville in honor of his direct superior as territorial governor, Revolutionary War hero General Henry Knox (1750-1806), who served as the first U.S. Secretary of War from 1785 to 1794.

Governor Blount designated Knoxville as the capital of the Territory South of the River Ohio from 1791 to 1796. Knoxville also served as the capital of the State of Tennessee from 1796 to 1812, with the exception of one day in 1807, when the legislature met in Kingston to fulfill a treaty obligation with the Cherokee, and briefly again in 1817-18. Frontier leader General John Sevier, a resident of Knox County, served as governor of Tennessee from 1796 to 1801 and 1803 to 1809, most of Knoxville's years as the state capital. Since no state capitol building was constructed until 1845, when work began on the capitol building in Nashville, the general assembly met in taverns and public buildings. The William Blount Mansion (1792), the home of Territorial Governor Blount, is the most historically significant dwelling surviving in Knox County from the pre-statehood era. It is the only National Historic Landmark in the county.

Posted by Historical Melungeons at 9:57 AM No comments: Links to this post

A Review of Family Tree DNA’s Family Finder – Part I

Since late 2007, several “direct-to-consumer” or “DTC” genetic testing products have entered the marketplace, many of which offered some degree of autosomal ancestry analysis (including 23andMe, deCODEme, and Pathway Genomics, among others). Posted by Historical Melungeons at 11:09 AM No comments: Links to this post

Follow Newsweek Reporter as She Tries Out the Autosomal DNA Tests

You can even keep up with Mary Carmichael on Twitter if you want to.

Some guidelines and details for my week-long project.

I’m trying to choose whether or not I want to take a direct-to-consumer genetic scan of hundreds of thousands of variants in my genome. Before we get started with the big questions, here are some basic queries that many consumers may have, as well as some information about myself and this project.

So how will this work, anyway?

I'm currently in possession of a direct-to-consumer genetic test—I just haven't decided if I'll use it. For three days this week, I'll pose a question a day to a variety of sources about the value of these tests. I'll post their answers on this site, along with my reaction. I'll also be soliciting opinions from commenters and people following me on Twitter. On Friday, Aug. 6, I'll evaluate everything I've learned and reveal whether I've decided to take the test.

Which DTC genetic testing kit did you buy?

Currently, there are two large, reputable companies offering scans of hundreds of thousands of genetic markers directly to consumers, the same ones that introduced the tests to the public, launching within a day of each other in 2007: 23andMe and deCODE. I don’t plan to reveal here which company’s kit I bought, because I don’t want to become a de facto ad for either company if I take the test. However, it’s worth noting that there are some differences between the firms. 23andMe charges a lot less, for instance—$499 for a health and ancestry scan, compared to the $2,000 price of the deCODEme complete scan—and tests for about half as many genetic variants, 550,000 compared to deCODE’s 1 million. Aside from the occasional embarrassing slip-up, 23andMe does a fine job of quality control in identifying genes. So does deCODE, which isn’t a testing company so much as a lab that happens to sell tests while producing a near-unrivalled body of genetics research. Both companies have also put a lot of effort into conveying their findings in innovative (if not always fully transparent) ways. They try to interpret their data with a lengthy report and continuous updates on the Web; deCODE’s service even links to the original research that underlies the test.

Posted by Historical Melungeons at 12:59 PM No comments: Links to this post