Morris S. Miner July 22, 2012Fuquay-Varina - Morris S. Miner went home to be with his Lord Jesus on Sunday, July 22, 2012. Memorial service will be held on Wednesday, July 25, 2012 at 2:00 p.m. at Thomas Funeral Home Chapel. Visitation will be from 1:00 - 2:00 pm, one hour prior to the service. Interment will follow at Wake Chapel Memorial Gardens. He was born in Blackwater, Virginia on July 21, 1933 and grew up in Elizabethton, Tennessee. Upon graduation from Unaka High School in 1951, he joined the United States Navy. He served five years on active duty as a hospital corpsman during the Korean War, and an additional three years on inactive duty. Upon leaving the military Morris entered college in 1957 at Samford University graduating in 1960 with a BS in Chemistry. He continued his studies in graduate school at the University of Alabama. From 1960 to 1962, he worked for Warner Chilcott Pharmaceutical Company as a salesman covering the states of Louisiana and Mississippi. From 1963 to 1967, Miner owned and operated construction, real estate, and insurance companies in Eastern Tennessee and Western North Carolina.

Posted by Historical Melungeons at 9:56 PM No comments: Links to this post

"'Of Portuguese Origin': Litigating Identity and Citizenship among the "Little Races" in Nineteenth-Century America,"

The history of race in the nineteenth-century is often told as a story of black and white in the South, and white and Indian in the West, with little attention to the intersection between black and Indian. This article explores the history of nineteenth-century 's "little races"—racially ambiguous communities of African, Indian, and European origin up and down the eastern seaboard. These communities came under increasing pressure in the years leading up to the Civil War and in its aftermath to fall on one side or the other of a black-white color line. Drawing on trial records of cases litigating the racial identity of the Melungeons of Tennessee, the Croatans/Lumbee of North Carolina, and the Narragansett of Rhode Island, this article looks at the differing paths these three groups took in the face of Jim Crow: the Melungeons claiming whiteness; the Croatans/Lumbee asserting Indian identity and rejecting association with blacks; the Narragansett asserting Indian identity without rejecting their African origins. Members of these communities found that they could achieve full citizenship in the polity only to the extent that they abandoned their self-governance and distanced themselves from people of African descent.

Posted by Historical Melungeons at 4:35 PM No comments: Links to this post 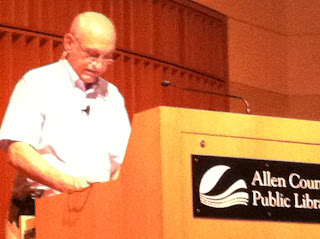 
Wayne Winkler, Jack Goins and Roberta Estes were honored to be able to present the first, and possibly the only, comprehensive Melungeon-focused series that included an introduction to Melungeons and their history and heritage, their migration history and the results of the landmark DNA study, Melungeons: A Multi-Ethnic Population. 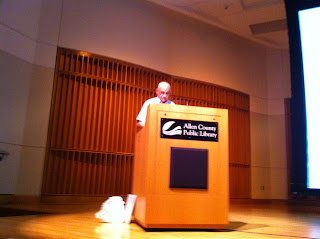 The Allen County Public Library, in Fort Wayne, Indiana is a leader in genealogical research and also in the preservation of history.  Their facility also includes a state-of-the art auditorium and television studio.  They tape many shows there and now, we’re proud to say, our series will be added to their catalog of free videos available online.  We will provide the link when they become available.

These presentations were really the culmination of decades of work.  The icing on the cake is the DNA study that has clarified the history of the Melungeon people and the core families.

Roberta began the day with an Intro to DNA and Genetic Genealogy explaining how DNA for genealogy works.  This session is always popular, and this event was no exception.  Roberta uses her own family pedigree chart as an example and nearly always meets a new cousin or two.  There are lots of DNA tools in the genealogists tool box, more now than ever.

Wayne Winkler’s presentation, The Melungeons: Sons and Daughters of the Legend provided an overview of the mysterious mixed-ethnic population first documented in northeast Tennessee and southwest Virginia in the early 19th century.  Wayne is extremely well-spoken, and even though I’ve heard him before, I’m always caught up in the spell he weaves.  Wayne’s book, Walking Toward the Sunset, The Melungeons of Appalachia goes a bit deeper than his presentation, so I would encourage everyone interested in an accurate overview of this topic to read his book.

Jack Goins’ sessions began the afternoon.  How fitting that Jack is the Hawkins County, Tennessee archivist.  His presentation, Examining our Melungeon Neighborhood and Migrations, tracked the original Hawkins County Melungeon families backwards in time, through the New River area, through the Flat River area and back into Louisa County in the mid-1700s.  Indeed, this core group was there, together, before migrating in steps towards Newman’s Ridge.  Jacks photos of the actual locations bring them to life.  Jack’s most recent book, Melungeons: Footprints from the Past was published in 2009 and details the history, with source documentation, of the Melungeons, beginning in Hancock and Hawkins Counties in Tennessee.  This is a must read for anyone researching Melungeon families.


The final presentation of the day was given by Roberta taken from the academic paper recently published in the Journal of Genetic Genealogy, Melungeons: A Multi-Ethnic Population.  Roberta, Jack Goins, Janet Crain and Penny Ferguson co-authored the paper.  This paper uses the genetic genealogy information from participants in the Melungeon DNA projects to paint a fuller picture of the Melungeon core families, and therefore, of the Melungeon population as a whole.  The Melungeon core families, as identified by their paternal (surname) lines include European and African progenitors, about half and half.  All maternal lines tested have been European.  There was no direct paternal or maternal Native American heritage found, as had been expected, but there are two lines that are ancestors to the Melungeon families that include Native lines. It’s also of interest that all of the African lines, except one, are found together in Louisa County, Virginia, but the Native lines don’t enter the pedigree chart until later, on subsequent steps of the migration to Tennessee.

Roberta and Jack would like to stress that the DNA project is ongoing and people connected to these families are encouraged to join.  Questions - Contact Jack at jgoins@usit.net.

Following the presentations, the speakers took questions and had a book signing.
Several people had questions about DNA and how to use their results to discern things like ethnicity.  One very nice gentleman, Gary, offered to be a guinea pig, so indeed Roberta took him up on his offer and performed a somewhat impromptu DNA analysis.  This gentleman had an African paternal line from Cameroon, but a quite rare maternal European line.  Both his paternal and maternal lines had been enslaved, so indeed, the European maternal heritage was a very unexpected result.  His autosomal test results showed that he was about half European and about half African.  Roberta’s business, DNAexplain, includes writing Personalized DNA Reports for customers.

Following the sessions, each speaker was asked what they believe were the salient points of the sessions and the project as a whole.

Wayne said that he “thinks the most important aspect of the presentations was that we now have data giving us a piece of the genetic portrait of the “core” group that settled in Hawkins/Hancock County in the early 19th century. It’s not the whole story, not the “final” word on the subject. In fact, it’s really the FIRST solid genetic data we have on these folks. Too many people think that the genetic profile of the Melungeons has already been documented, but that’s not the case. Thanks to the seven-year effort by Roberta, Jack, Janet, and Penny, we now have dependable, factual information about who our ancestors were.”

Jack said that “what is very important or noticeable to me is examining events in our history like the illegal voting trials for this example.  All of the Melungeon men  tried had African paternal heritage, except possibly one who took his mother’s surname.  Three of the Collins were brothers, sons of old Benjamin and Zachariah and his brother Lewis.”  Jack told me that when he saw the record, in the archives, that Vardy Collins had paid the fine for illegal voting, instead of fighting the allegation, he knew in his heart that we would likely find African heritage.

I know that the results of the DNA study have disappointed a few people who were hoping for Native American results.  Some of the news reporting has, unfortunately, fanned those flames by what I would characterize as “race baiting.”  As authors and interviewees, we are not afforded the opportunity of reviewing the articles or interviews before they are either published or broadcast.

The Melungeon study and the study of genetic genealogy isn’t about race – it’s about heritage.  It’s about allowing your ancestors to reach forward in time to you with the truth that only their DNA can reveal.  Allow yourself to hear their whispers.  It’s their gift to you.  It’s about honoring those ancestors, the experiences they had, the trials they endured, all of which, combine to make you who you are today.  It’s about using DNA as the tool to raise the veil that covers the distant past.  To want them to be something they were not is to dishonor who they were.

So That's How This DNA Stuff Works

Bennett Greenspan on Jewish Voice with a great explanation of DNA testing.

Posted by Historical Melungeons at 10:11 AM No comments: Links to this post

This and many other videos available on YouTube. http://www.youtube.com/watch?v=_lP_B4JxFB0&list=PLE84A2966F40F0802&index=11&feature=plpp_video

Posted by Historical Melungeons at 12:39 AM No comments: Links to this post