Great Grandma was a Full Blooded Cherokee Princess ~ Now What????

Roberta Estes copyright 2011
So you've become interested in your family heritage and someone told you that your great-grandmother was a full blooded Cherokee princess.  You find this quite interesting of course, and would like to find out more.  But where do you turn, what do you do, and can DNA testing help you?  Let's look at your options one at a time.
First, let's just be honest here.  Your great-grandmother was probably NOT a full blooded Cherokee Princess.  I've heard this story thousands of times - even in my own family - and it's simply not true.  There are two reasons it's not true - but don't give up -  keep reading - there's light at the end of the tunnel!
Reason 1 - The Cherokee didn't have princesses.
Reason 2 - Unless your great-grandmother was living on the Cherokee Reservation in either Oklahoma or North Carolina , she probably wasn't full blooded.  The Cherokee east of the Mississippi were relocated in the 1830s in the ordeal known at the Trail of Tears.  You can read more about that at this link - http://en.wikipedia.org/wiki/Trail_of_Tears and here http://en.wikipedia.org/wiki/Cherokee_removal.   A census was taken at that time, and even then, few Cherokee were "full-blooded".  Many were admixed with mostly European traders, but a few with African Americans as well.
The Cherokee who were allowed to remain east of the Mississippi were already living outside of the reservation, were citizens of the states in which they lived and owned land, living mostly as Europeans, not Native people.  Most were Native women married to white men.  Today they form the Eastern Bank of the Cherokee and mostly descend from people on the original Baker Roll.  You can search the Baker Roll here - http://www.accessgenealogy.com/native/baker.php.
Given a generation length of 25-30 years on the average, the Cherokee removal was between 6 and 7 generations ago.  IF your ancestor was full blooded at that time, and IF they married a full-blooded white person for every generation since, you would be 1/64th Cherokee and great-grandma would have been 1/8th.  Of course, there are a lot of IFs in that statement.
Now, the good news.  Many times, where there is smoke, there is fire.  If your family carries the oral history that you have some Native ancestry, you probably do.  These stories tend to become exaggerated over time and also tend to lose track of the correct generation.
Let's talk about some things you can do to discover your Native heritage.
1.  The census is your friend.  Thankfully, the census has been indexed and is available online.  Some years are available free by using Heritage Quest, available though most libraries via the internet with a library card.  Check with your local library.  Personally, I use Ancestry.com but it requires a subscription for most years.  In the census, if your ancestor was of mixed heritage and it was visible, they may be noted as mulatto in the census.  There were only three categories, black, white and mulatto.  In this context, mulatto meant mixed.  Find them in every census available.  The census began in 1790 and in most places, the census is available every 10 years, except for 1890 which was destroyed.  Sometimes their ethnic designation changed from census to census and even one mulatto finding is a significant hint.  Check their siblings too.
2.  Where did they live?  The census will tell you not only where they lived, but where they were born and where their parents were born.  Often you can track the family back in time. If your ancestors were Cherokee, they would have been living where the Cherokee tribe was located.  On the map below, you can see where the Cherokee and other tribes were found before removal in the 1830s. 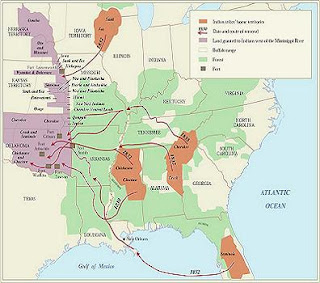 3.  The word Cherokee has become generic, like the word Kleenex.  Many people who descend from now defunct tribes have lost their tribal name.  The Cherokee are the best known tribe east of the Mississippi, and therefore many families have assumed for years that the Cherokee were their ancestors, when they were not.  In the 1600s, 1700s and 1800s, many tribes were nearly decimated and their remnant people joined together.  You can read about this in my paper titled Where Have All the Indians Gone? Native American Eastern Seaboard Dispersal, Genealogy and DNA in Relation to Sir Walter Raleigh’s Lost Colony of Roanoke. This paper is available free on my website, but was originally published in the Journal of Genetic Genealogy.  It discusses the various tribes, their locations as well as their fates at length.

Enter your email address to start receiving this blog in your inbox
Posted by Historical Melungeons at 10:42 PM