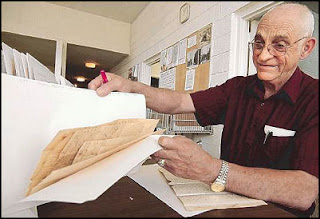 
Hawkins County Archivist Jack Goins and volunteers with the Hawkins County Records Commission are in the process of sorting tons of historic documents that have been stored in the basement of the 170-year old Hawkins County Courthouse. David Grace photo.
ROGERSVILLE - It's always been assumed that historical documents dating back to the 1700s that were stored in the basement of the 170-year-old Hawkins County Courthouse had been picked through by treasure hunters looking for signatures of presidents and other valuable records.
If there were treasure hunters pilfering the courthouse basement in the past, they missed a few hidden treasures, which volunteers with the Hawkins County Records Commission have uncovered during its first year and a half of existence.
The Records Commission is in the process of preserving, copying, indexing and storing tons of documents dating from 1790 to 1930.
Probably the most valuable treasure discovered thus far is a land grant in Hawkins County for a man named Thomas Rogers which was signed by President James Monroe in 1820.
Hawkins County Archivist Jack Goins, who is overseeing the Records Commission's document preservation effort, said he's found similar James Monroe documents for sale on eBay. Such a document has been selling for prices beginning at $1,500.
This document won't be going up for sale on eBay, Goins added. It has been framed and is hanging on the wall in the Records Commission office in Rogersville.
Also hanging on the wall at the Records Commission are two other Hawkins County land grants for a man named Samuel Riggs which were signed in 1857 by then Tennessee governor and future President Andrew Johnson.
Another interesting land grant found among the courthouse documents was signed around 1820 by former Tennessee governor and Rogersville resident Joseph McMinn, who served in office from 1815-1821.
All four grants came to be stored in the courthouse basement because they were later used as evidence in court cases.
Much of the other historical finds would probably only be of interest to county or regional history buffs. For example, there were photos of Main Street Rogersville taken in 1922 discovered among evidence that was used when Rogersville sued the Cumberland Telephone and Telegraph Co. for damages caused to the street when telephone poles were installed.
Full Article Here:
http://www.timesnews.net/article.php?id=3631211
Posted by Historical Melungeons at 8:50 PM